25 March to Oct 2022
​WAHTS is  contributing to a telecommunications history display to run for most of 2022 school year at Wireless Hill Museum Ardross (Melville City Council).  see below 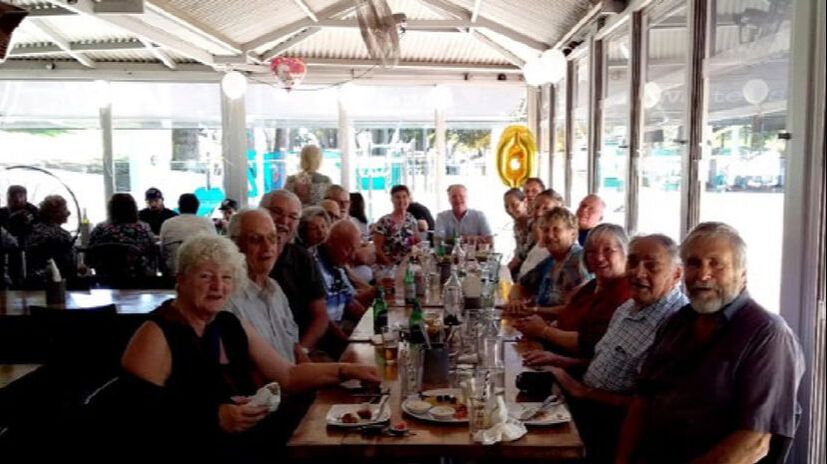 Sun 18 April 2021 Shannon's Classic Car Show
https://www.shannons.com.au/club/events/shannons-classic-car-show-2021/​
WAHTS in conjunction with the Vintage Wireless and Gramophone Club had a display at this event. Had quite a few visitors stop by our display and have a chat.  A great day out with lots of cars to see. ​

November 2020 was a busy month for the WAHTS.
On 10th November we participated in the “Man Cave” community event organised by the Melville City Council at their “Blue Gum” Centre in the suburb of Brentwood. Clubs and other community groups put on displays aimed at attracting men into recreational activities.

Saturday 28th November saw our Christmas lunch at the riverside Point Walter Café followed by sweets, coffee and the general and annual general meetings at our President’s home 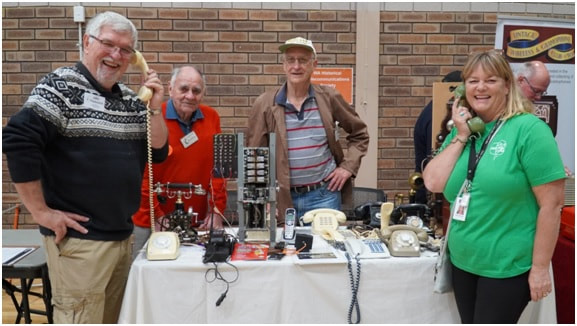 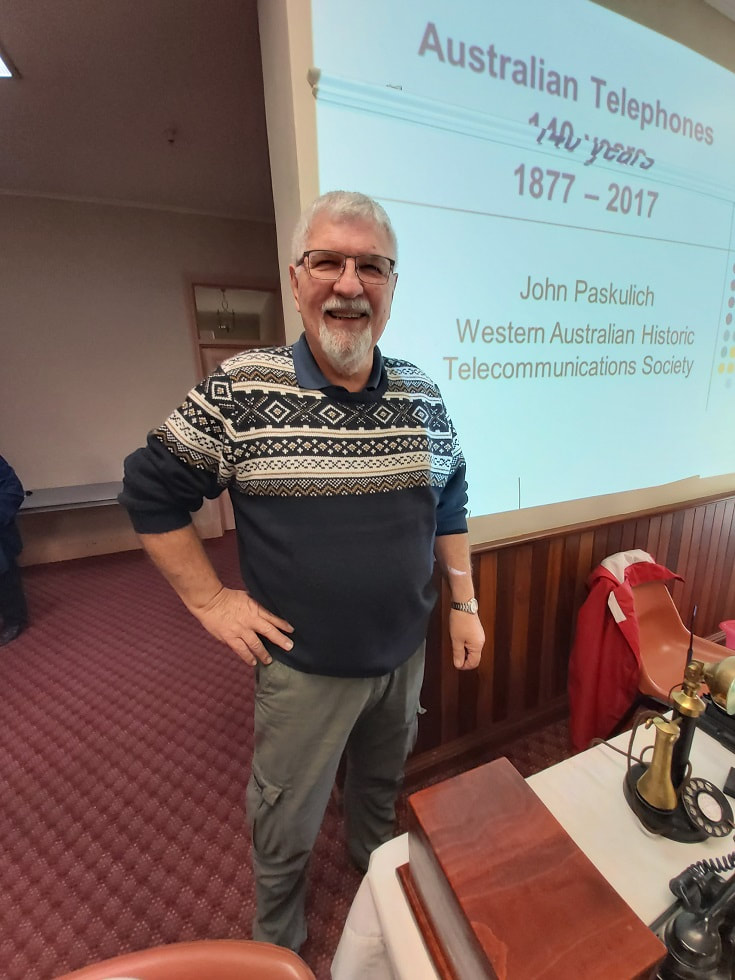 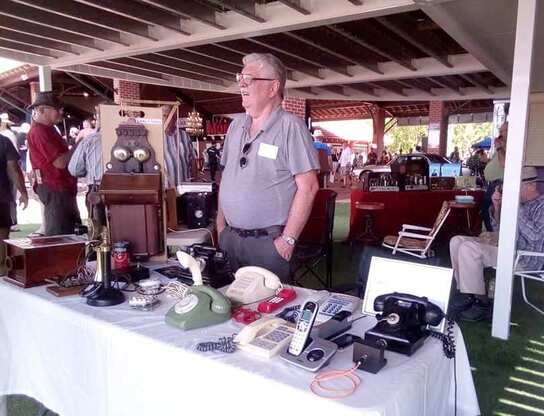 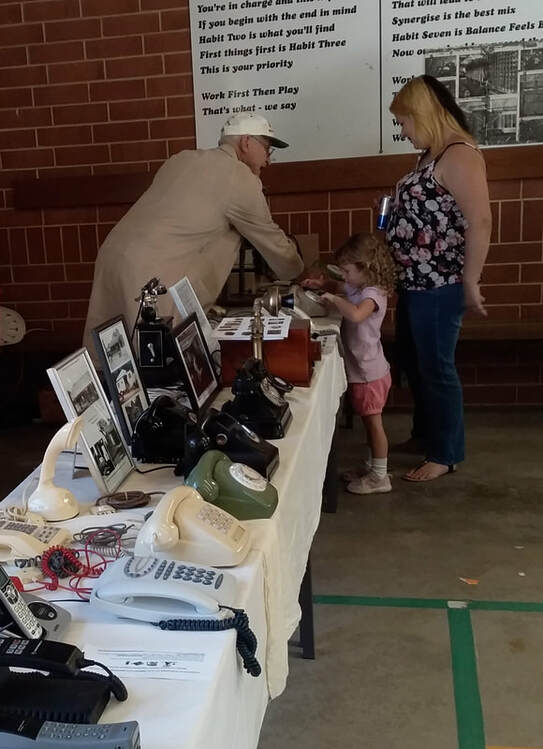 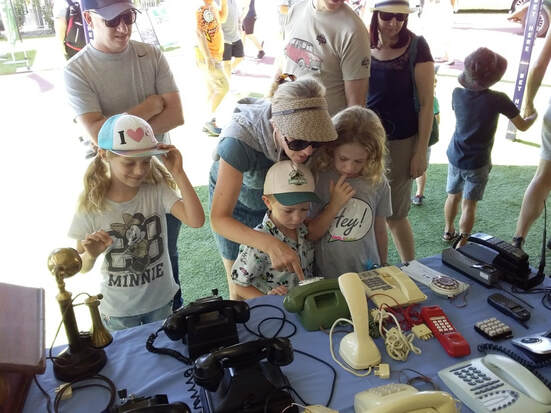 Guildford Heritage Festival
26 March 2017: The WAHTS and many other heritage groups put on displays as part of this celebration. Further information can be found at this Facebook page
https://www.facebook.com/guildfordheritagefestival/
The Society shared a display at this event with the Vintage Wireless and Gramophone Club (http://vwgc.org.au/)

Fremantle Heritage Festival - Arthur Grady Day
28 May 2016: This is the second year that the society has put on a public display during Arthur Grady Day in Fremantle. The display went well with quite a few visitors showing interest in our vintage telephone display and working model of a step by step exchange. The kids were fascinated with our working copy of an A.G. Bell 1877 cased telephone system. 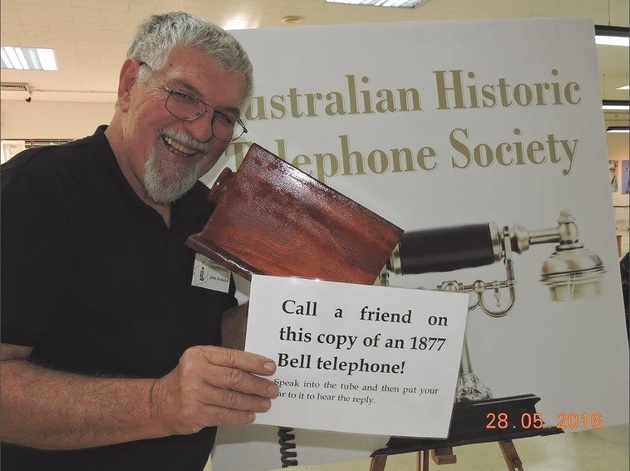 John showing off a copy of an 1877 Bell phone
Further information about the Fremantle Festival can be found at this Facebook page.
https://www.facebook.com/fremantleheritagefestival/

Guildford Heritage Festival
3 April 2016: The Society shared a display at this event with the Vintage Wireless and Gramophone Club (http://vwgc.org.au/)

Further information can be found at this Facebook page.
https://www.facebook.com/guildfordheritagefestival/ 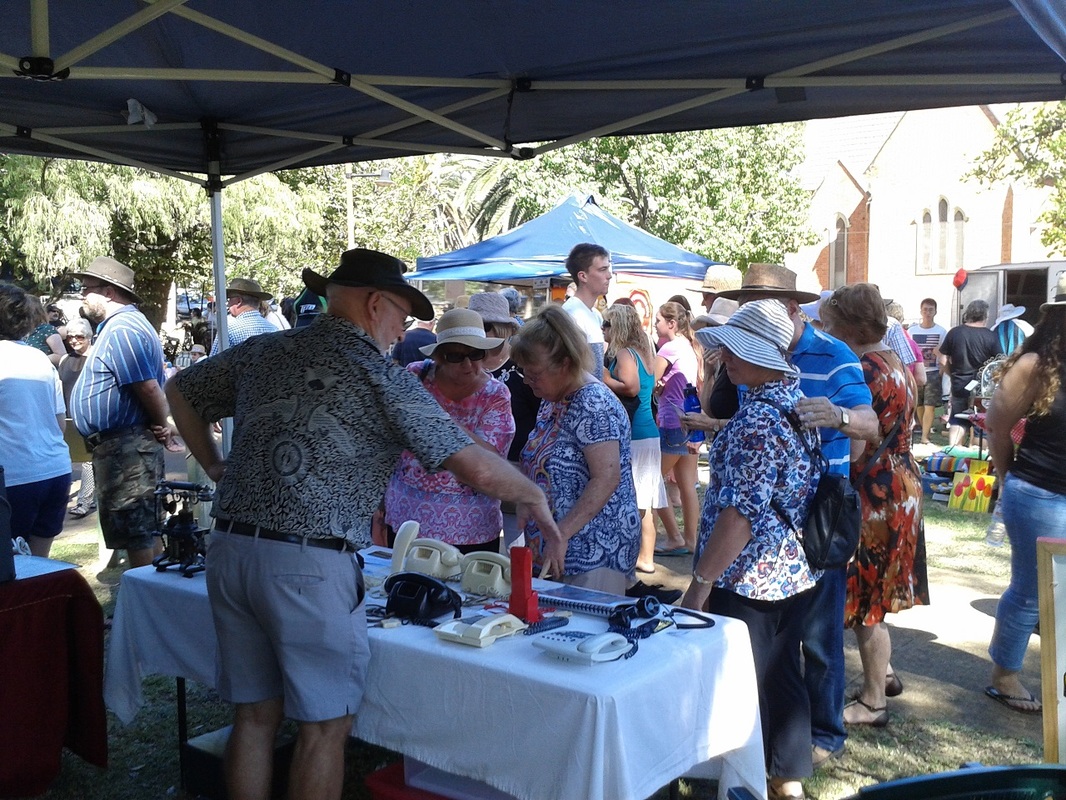 Colin describing some telephones to visitors at our Guildford Festival display
Have a Go day
Wed 11 November 2015: The sub-branch put on a display at the Have a Go Day event  at Burswood Park. Further information about the event can be found at:
http://www.srcwa.asn.au/have-a-go-day.html 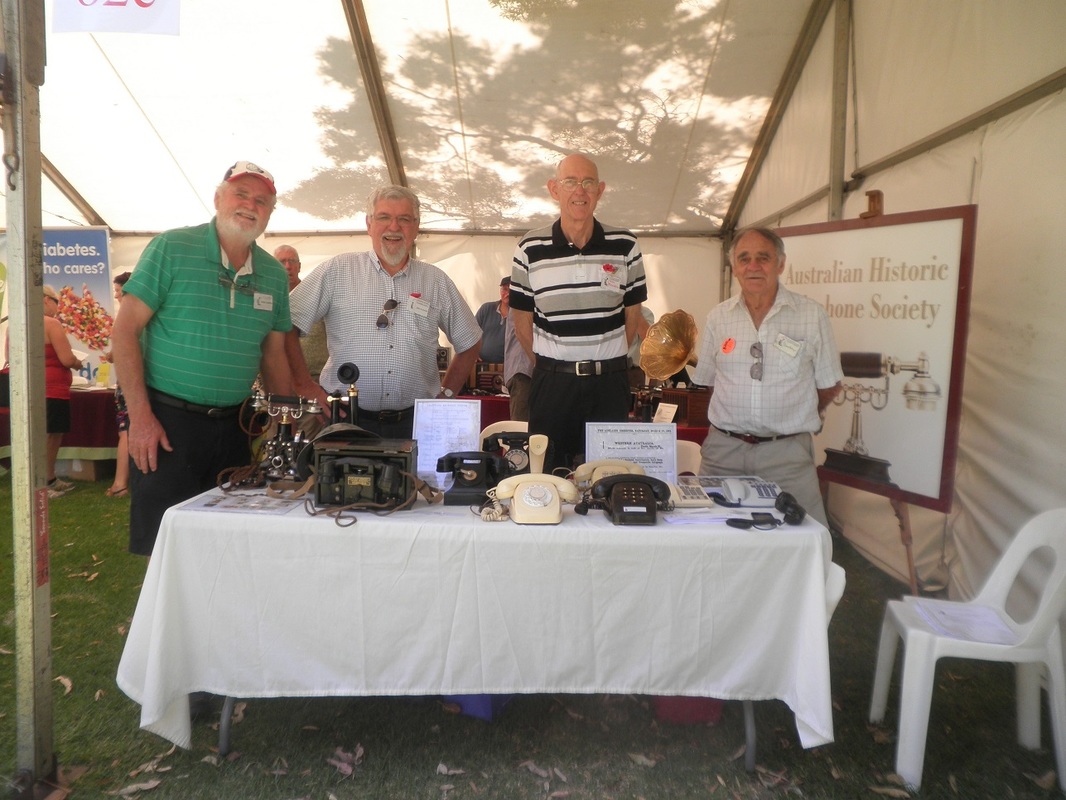 Arthur Grady Day
Sat. 9 May 2015: Veteran & Vintage Motor Cycle Event. "In 1924 Fremantle bicycle maker Arthur Grady became the first person to ride a motorcycle around Australia.  Every year Fremantle vintage enthusiasts get together for a huge vintage display to celebrate Arthur’s feat. " This event was part of the Fremantle Festival and attracted numerous exhibits from a range of vintage and collectable organisations. AHTS WA members put on a display of telephone history and artefacts in the Fremantle Town Hall.
2014:
100th anniversary of the first automatic telephone exchange in Perth
The WA sub-branch of the Australian Historic Telephone Society (AHTS) was involved in several projects during September, October and November 2014 to celebrate the 100th anniversary of dial telephony in WA. The projects were:
Telstra display
The Telstra display (assembled by AHTS members) of telephone artefacts to celebrate the 100th anniversary of the cutting over of Central Exchange went well. Central was the first automatic exchange in Perth in 1914. The display was located in the Hay St Mall Telstra Shop and opened on Friday 26 September, exactly 100 years to the day after Central was cut over on that date in 1914. It remained on display until Wed 1st October.
Perth Heritage Days weekend
Following the Telstra display The AHTS sub-branch operated a display during the  Perth Heritage Days weekend on 18 and 19 October in the old GPO building in Forrest Chase. There were vintage telephones and other objects on show and the centre-piece was a model step by step telephone exchange recently refurbished by one of our club members. Volunteers attended the display to show off the items and answer questions about our club. The venue was well attended with one estimate of around 600 members of the public viewing the displays over the two days. Other organisations also displayed at this venue. They were the Vintage Wireless and Gramophone Club, the Morsecodians and the Red Cross who were celebrating the 100th anniversary of their service in WW1. Further information about the event can be found at:
http://heritageperth.com.au/
Have a Go Day
Wed 12 November: The sub-branch put on a small but effective display at the Have a Go Day event  at Burswood Park. Further information about the event can be found at:
http://www.srcwa.asn.au/have-a-go-day.html